The Parish of Killard (Doonbeg)

The parish of Killard, or Doonbeg as it is better known, traces its origins back to the 6th Century.  Cill Aird meaning Church on the Hill was founded by St. Senan, patron saint of West Clare.  Senan’s Oratory in Killard overlooked the surrounding countryside and it was on this same site that Killard Church, now a ruin was built about 1000 A.D.

In the ancient territorial divisions of Thomand, the parish of Killard belonged to Corcabaiscinn West.  The parish was somewhat larger in those far off days, stretching further west into the Atlantic Ocean.  But, in the year 801, as we are told in the Annals of Clonmacnoise, a great earthquake occurred in West Clare, resulting in the deaths of over 1,000 people.  The sea divided the land much of which was submerged beneath the waves, leaving only a few islands, i.e.: Mutton and Mattle.  This disaster is also referred to in the Annuals of the Four Masters.

However, St. Senan’s Church in Killard survived and it continued as the principal place of worship for the people of the parish up to 1651.  That year, Cromwellian soldiers sacked Killard Church and Kilferagh Church in the neighbouring parish of Kilkee.  It is noteworthy that it was 1651 that Killard and Killferagh parishes were united and continued as one parish for 200 years.  In 1855, Killard (Doonbeg) once again was made a separate parish and that position holds to the present day. 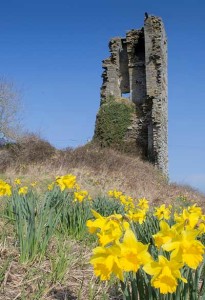 Doonbeg Castle
The name, Doonbeg, is derived from Dun Beag, meaning, the small fort.  The Village grew up around Doonbeg Castle which was built by Philip MacSheeda Mor Mac Con in the 16th century for the Earl of Thomond, Daniel O’Brien.  Turlough MacMahon of West Corca Baiscinn took it in 1585.  After his death in 1595 at the end of a fierce siege, the castle was surrendered again to the O’Brien’s who, as victors,  hanged the entire garrison back to back. O’Brien, a supporter of Queen Elizabeth, received a grant of most of Tadhg Caoch MacMahon’s (heir of Turlough) property, including the castle.

O’Brien, Earl of Thomond, had possession in 1619 when he gave it to James Comyn.  Nicholas Strich Fitznicholas of Limerick, also put in a claim for the castle, as Nicholas Strich’s heir, around this time.  It was confiscated by the Crown for failure to repay debts in 1688 and sold in 1703.

When T. J. Westropp visited the castle in 1893, it stood 60 feet high with a frontage of 45 feet from west to east and a depth of 33 feet from south to north.  By that time it lacked gables, battlements and chimneys.  Despite its condition, seven families lived in the tower.  In 1907 two families lived there and when Westropp returned a few years later, a man occupied one of the small western rooms.  Up to 1930 it was occupied and and one of its occupants was a schoolmaster named Michael Scanlan. Locals used its upper floor with its mossy overgrowth as a picnic spot since it afforded privacy and beautiful views.
In September of 1939, the castle  was in a dangerous condition due to the effects of nature and the crumbling of the river bank.  Sadly, most of the castle has come down, leaving only the north-western corner standing.  There has been no appreciable structural changes in the last 40 years and it remains today a strong link with Ireland’s rich heritage. 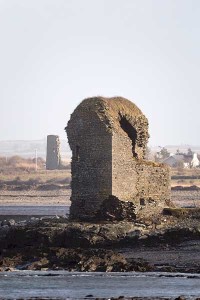 Doonmore Castle
Doonmore Castle, the big fort, adjacent to the harbour, was built by Philip Mac Sheeda Nor McCon.  The annuals of the Four Masters refer to it as Dun More Mhic and Fhearnachaigh.  At the end of the 16th Century, Donough Mac Dermot Mac an Fhearmachaigh was in possession but Mahon MacGorman held title to one third of the castle and all of Donough’s Land. Sir Daniel O’Brien of Dough was listed as the owner in 1574.  In 1594 Mahon MacGorman assigned his interest in the place to the Earl of Thomond.

The original castle was considerably higher until a turret at the south-western corner fell soon after 1898 bringing most of the walls of the upper room with it.   The rest was pulled down soon afterwards leaving only the lower portion, from the stone vault down, intact.

Forts
FORTS were built by the Celts during the Iron Age for protection against attack. Located on hill­tops or high ground, they were defended enclosures. A great bank of earth and stones (if available) was built around the hilltop to form the enclosure. Houses were built inside these huge defenses and often a whole tribe lived there. These were the most common types of settlement at the time. The Irish work ‘dun’ means stronghold or defended enclosure. Hence, the names, Dun Beag (Doonbeg) and Dun Mor (Doonmore), translated means great fort of stronghold and small fort. Other words, like ‘Lios” or ‘Cathair’ also mean fort.

The large number of forts located in Doonbeg Parish proves that the area was populated during the Iron Age. The forts also help to explain many of our town land names such as Dun Beag, DunMor and Cathair Finic, (town land Caherfeenick.)

Promontory Forts:
Located on coastland which jutted into the sea and has steep cliffs on three sides. Raising a high bank of earth and stone this area of land was defended on the fourth side. Baltard promontory fort has the added advantage in that the sea almost cuts off the fourth side from the mainland. The underground sea at this point resembles the Bridges of Ross.

Ring forts:
These are undoubtedly the commonest monuments on the landscape and the ones most often under threat. They are found in every country and are known by various names (fort, rath, dun, lios, etc.) Basically, the ring fort is a space surrounded by an earthen bank formed of material thrown up from a fosse or ditch immediately outside the bank. Generally, they vary from 25-30 metres in diameter, are usually circular but can also be oval or D-shaped. Some have more than one bank and ditch but such examples are rarer than the simple type. In some areas, especially in the west of Ireland, a massive stonewall enclosed the site in place of a bank and ditch. This type of ring fort is called a caher, cashel or stone fort and well-preserved examples may have been heavily robbed of stone to build roads or field fences and often only traces of the wall survive.

Both types of ring fort were erected as protected enclosures around farmsteads mainly during the Early Christian period (c.500-1100A.D.). The dwelling houses and other buildings were generally dry stone or timber built and the remains of stone structures are sometimes visible. It is only during archaeological excavation that the traces of wooden structures can be found. Sometimes especially in permanent pastureland or rocky terrain, ancient field systems, associated with ring forts survives. 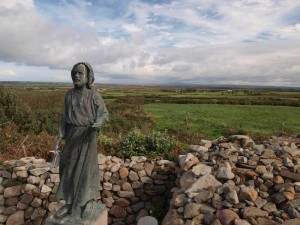 St Senans Altar
The Altar is situated near Bansha N.S., two miles south of Bealaha Village and off the Doonbeg/Kilkee Road. The altar dates back to the sixth century when Senan was Bishop and Patron of Corca Baiscinn (West Clare). He built the Altar in Thanksgiving for receiving a bell (Clog na Néall) which descended from the clouds on the summit of Bansha Hill – on the spot where the Altar stands. During Penal Times in Ireland the Altar was used for the celebration of Mass.

The elevated site gives unrestricted view of the surrounding countryside of Co. Clare extending to parts of Counties Galway, Limerick and Kerry. A local committee has restored the Altar and developed the site with the assistance of Clare Leader and the Board of Works. 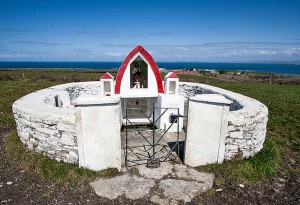 The Blessed Well
The Blessed Well in Killard is called Our Lord’s Blessed Well.  St. Senan is said to have stopped and washed his feet there on his way to Scattery Island. On Good Friday people would go to the well, pray and do the rounds. The rounds consisted of the outer circle where one said a Rosary, and again on the second and third circle. Then one knelt by the wall inside the wall and said another Rosary and drank the water. The old adage is that “If you see a fish in the well, your request would be answered.”